Treasury & Capital Markets
Hong Kong IPO market bursts out of the blocks
Fund-raising hits record high of US$13.9 billion in first quarter of 2021
1 Apr 2021 | The Asset

Hong Kong’s initial public offering market continued its strong momentum from the second half of last year, achieving a historic high in the first quarter of 2021, with total funds raised hitting US$13.9 billion as of March 24. The Shanghai Stock Exchange also ranked among the top five stock exchanges with US$6.9 billion in IPO proceeds recorded.

According to KPMG’s latest analysis, total funds raised globally more than tripled compared with the same period last year. The US, Hong Kong and China’s A-share markets continue to take the lead, raising a combined US$61.4 billion or over 63% of the global total.

Paul Lau, partner, head of capital markets, at KPMG China, says: “As Covid-19 vaccines become more readily available globally in 2021, a resurgence of the global economy is expected. Low interest rates, a high level of market liquidity, and solid investor sentiment remain. As such, we are expecting another active year of IPOs globally.”

While funds raised through special purpose acquisition companies (SPACs) are not included in the global traditional IPO tally, SPACs also continued to be popular in Q1 2021, with a record-breaking US$95.6 billion raised, the analysis shows.

On the back of China’s strong economic recovery and the implementation of registration-based listing platforms, the A-share IPO market remained active during the first quarter of the year. The STAR Market continued to make its mark with 35 deals, raising a total of 33.2 billion yuan (US$5.06 billion). Thirty-three deals were completed under the ChiNext reform, which focuses on serving innovative growth companies and startups, raising a total of 19.0 billion yuan. 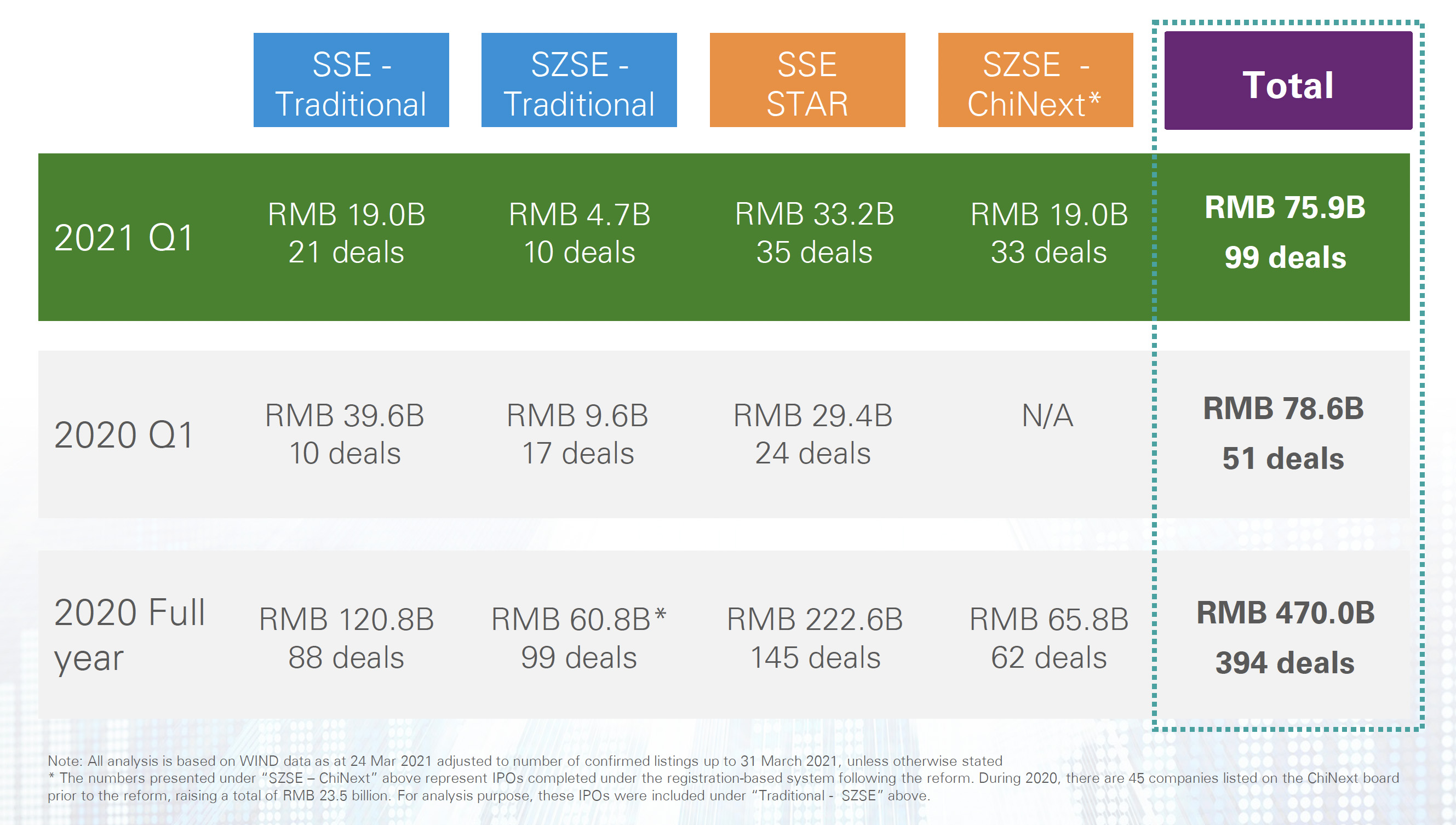 The listing pipeline in mainland China bourses remains active with over 700 active applicants, most of which relate to the STAR Market and the ChiNext board, indicating solid market confidence in those boards.

In terms of sectors, the listing momentum of technology, media and telecommunications (TMT) as well as industrials companies prevailed, as the digital economy and advanced industrials further expanded in China. Advanced industrials, TMT and life sciences dominated the STAR and ChiNext pipelines, representing 88% of the listing applications in the first quarter.

Louis Lau, partner, capital markets advisory group, at KPMG China, says: “Looking forward, the new ‘dual circulation’ economic strategy places the domestic market as the mainstay for China's future growth, which benefits innovation sectors such as applied technology firms. At the same time, the quality of listings remains a focus for the regulators, as part of their continuous efforts to enhance the quality of the capital markets for high-quality economic development.”

With the growing number of completed secondary deals in recent years, the Hong Kong bourse is viewed as an attractive option in terms of a listing venue for homecoming listings by US-listed Chinese-based companies. Three secondary listings were completed during the quarter, raising a combined HK$49.5 billion and additional listed Chinese companies are expected to follow suit.

Also, Hong Kong has again proven to be a popular choice among innovation companies, with pre-revenue biotech, weighted voting rights, and secondary-listing companies accounting for seven of the top 10 listings in the city in the quarter.