Gold demand rose 12% year-on-year to 2,189 tonnes in the first half of 2022, thanks to strong exchange-traded fund inflows in the first quarter, although it was down 8% y-o-y to 948 tonnes (excluding over-the-counter) in the second quarter, according to a new report.

After an initial rally in April on geopolitical risks and building inflationary pressure, the gold price dropped in Q2 as investors shifted their focus to rapidly rising interest rates and a strong US dollar, the World Gold Council says in its latest Gold Demand Trends report.

The 6% decline in the gold price over the quarter impacted gold ETFs, which saw outflows of 39 tonnes in Q2. Net H1 inflows reached 234 tonnes in H1, compared with 127 tonnes of outflows a year earlier. However, the Q2 decline sets a weaker tone for ETFs in H2, given a potentially softening inflation outlook amid continued rate rises. 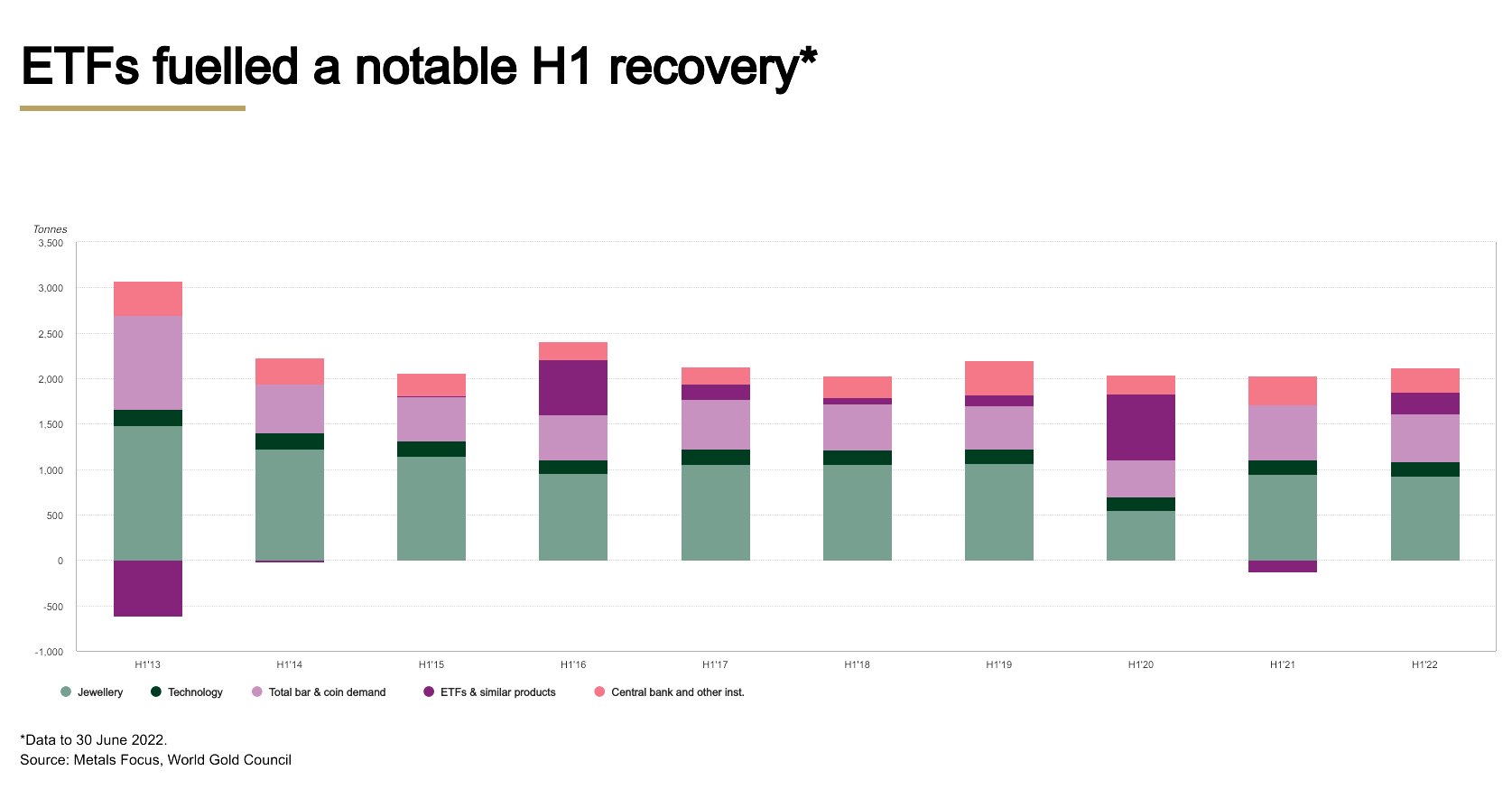 Louise Street, senior analyst, EMEA, at the World Gold Council, comments: “In the first half of 2022, the global gold market was supported by macroeconomic factors such as rampant inflation and geopolitical uncertainty, but it also faced headwinds from rising interest rates coupled with an almost unprecedented surge in the value of the US dollar. And while we have seen prices ease from exceptionally high levels in Q1, gold has been one of the best performing assets so far this year.

“Looking ahead, we see both threats and opportunities for gold in H2 2022. Safe-haven demand will likely continue to support gold investment, but further monetary tightening and continued dollar strength may pose headwinds. As many countries face economic weakness and the cost-of-living crises continue to squeeze spending, consumer-driven demand will likely soften, although there should be pockets of strength.”

Gold bar and coin demand remained stable at 245 tonnes in Q2. Growth in demand came notably from India, the Middle East, and Turkey which helped to balance weakness in Chinese demand that was partially driven by continued Covid-related lockdowns. As a result, demand in this segment declined 12% y-o-y to 526 tonnes in H1.

In the jewellery sector, gold demand rose 4% y-o-y to 453 tonnes in Q2, helped by a recovery in Indian demand, which rose 49% y-o-y. The strong performance in India balances a 28% decline in China, where the market was dampened by lockdowns that stalled economic activity and constrained consumer spending.

In the technology sector, demand for gold fell 2% y-o-y to 78 tonnes in Q2, and as a result, H1 demand was marginally lower y-o-y at 159 tonnes. The electronics sector has continued to experience supply chain disruption, and is now facing diminished consumer appetite for electronics as the cost-of-living crisis starts to bite.

Mine production hit record highs at 1,764 tonnes in H1, up 3% from a year earlier. Production was boosted by some projects mining higher-grade deposits and the Chinese mining industry returning to normal output levels after safety stoppages last year. Elevated gold prices in Q1, as well as increasing economic hardship and uncertainty, led to an uptick in recycling activity, with total H1 recycling up 8% y-o-y at 592 tonnes. Asset Management / Wealth Management
Are you prepared for your retirement?